Matinkylän Huolto Oy was founded in 1969 by two people in a modest hut. But the area itself was modest. In the 1960s, the grounds of the Matinkylä Manor were still being used for arable farming. 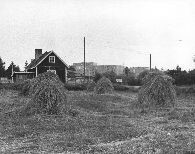 In the space of almost 50 years, the fields of Matinkylä have been transformed into one of Espoo´s most vibrant neighbourhoods. Matinkylä and Olari have amalgamated around the Iso Omena shopping centre and the large-scale commercial and residential developments in the area. Our main area of operations consists of one of Finland´s fastest growing areas, which will be number one in Espoo for many years to come.

Matinkylän Huolto has expanded along with Matinkylä and its neighbouring areas. It has become a modern, expertise-driven property company with a wide range of services.